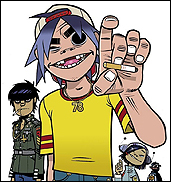 LOS ANGELES (CelebrityAccess MediaWire) — After a solid showing on the European festival circuit, Gorillaz have announced the routing for the upcoming North American leg of their "Escape To Plastic Beach" tour. The North American tour will begin in Canada at Montreal's Bell Centre on October 3rd before winding up on November 3rd at Rogers Arena in Vancouver.

Promoted by Live nation, the nineteen U.S. and Canadian dates will be followed by a series of ten shows across Europe and the UK, as well as, seven shows across Australia and Asia.

The group will perform not only tracks off of their latest release, but their two other platinum-selling albums as well. Gorillaz have already performed this year as a fill-in headliner for Glasto, taking up the slack after U2 was sidelined with Bono's back injury, as well as other headliner billets at Roskilde in Denmark and the Benicassim Festival in Spain. Gorillaz are also fresh off a performance in Syria on July 25th following a headline slot at Byblos Festival, in Beirut, Lebanon, making them the first major western band to play at the ancient Citadel in Damascus.

Their most recent album, 2010's "Plastic Beach" continues the story of the band through music and videos has already racked up the most successful YouTube video premiere for the single "Stylo" and has been voted as the #1 album in 2010 in an NPR listener's poll (talk about 'street cred')