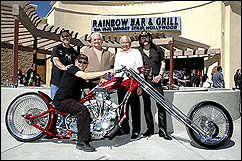 With more than 30 years in the music industry, record executives Jerry and Bob Greenberg are bringing the legendary rock-n-roll haven Rainbow Bar & Grill to Las Vegas. Set to open Memorial Day, the Rainbow Bar & Grill in Las Vegas will be located at 4480 Paradise Road at Harmon, across the street from the Hard Rock Hotel & Casino.

Throughout the years, the Greenberg brothers have played a key role in all aspects of music. Since the 1960's, they have been leaders at major music labels including Atlantic Records, MGM/UA Music, Warner Bros. Records, and Michael Jackson's MJJ/Sony Records. With a license from the Rainbow Bar & Grill's original owner Mario Maglieri, the Greenbergs plan to launch locations across the globe with the first to open in Las Vegas.

Due to the Greenbergs' successful establishment in the music industry, expanding the Rainbow to Las Vegas was an easy decision. "I've seen rock-n- rollers come and go, but they have stayed true to the Rainbow," explained Maglieri. "I have no doubt the Greenbergs will successfully recreate the following and years of loyalty the original Rainbow has garnered."

"Vegas has become such a hip place for the music industry, we realize the opportunity has come to expand the original Rainbow experience," said Jerry Greenberg, co-owner of the Rainbow Bar & Grill.

A landmark on the Sunset Strip in Hollywood, the Rainbow has played an unimaginable role in the music scene through the '70s, '80s, '90s and today. To this day, the Rainbow is still operated by Maglieri, who has been a central character in rock-n-roll for decades as owner of the Rainbow as well as the Whisky-a Go-Go. Located within steps of the Whisky, the Rainbow has been home to post-concert jamming sessions with rock-n-roll stars and is one of the most well-known music fan establishments in the world.

Because of its dedicated hospitality to the music industry, the Rainbow became a staple for many infamous bands who were regulars there before they topped the charts, including The Beatles, The Doors, Guns n'
Roses, Motley Crue, Led Zeppelin, Rolling Stones, Motorhead and Ozzy Osbourne, to name a few. Ozzy has claimed, "Everybody who's anybody has been to the Rainbow. It's incredible…"

Rainbow Bar & Grill in Las Vegas will be open 24-hours serving breakfast, lunch, dinner and late-night meals featuring a similar menu to the original, including its world-famous pizza and homemade chicken soup. Its decor will recreate the Hollywood location with red leather booths and rock-n-roll memorabilia adorning the walls. The venue will be 7,500 square-feet in size and include a full-service bar, two dining rooms with plasma television screens, an outside year-round patio, and a main lounge for live entertainment. –Jane Cohen and Bob Grossweiner