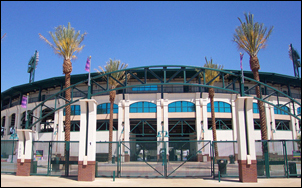 FRESNO, CA (CelebrityAccess MediaWire) — Announced in a press conference today, the Fresno Grizzlies have partnered with Chukchansi Gold Resort & Casino for the naming rights of the stadium, which will now be called Chukchansi Park.

The 15-year, $16 million deal results in an obligation of $1 million a year over the life of the agreement. In addition, $1 million of the total investment will be funded in the first year for stadium capital improvements and deferred maintenance. This agreement is one of the largest financial commitments for naming rights in Pacific Coast League (PCL) history.

"Chukchansi Gold Resort & Casino is an ideal partner for the Grizzlies, as they share in our vision for the future and the potential growth of the stadium," said Chris Cummings, Managing Partner of the Fresno Baseball Club.

"This partnership solidifies Chukchansi Park’s financial viability for the next 15 years. As the anchor of Downtown Fresno’s renaissance, this partnership will continue the momentum of the Grizzlies’ original dream," said Brian Glover, General Partner of the Fresno Baseball Club.

"Chukchansi is synonymous with premier entertainment in the Central Valley," said Jeff Livingston, Chukchansi Gold Resort & Casino General Manager. "Our community deserves a wide variety of entertainment and you will see that the partnership we have started with the Grizzlies is just the beginning of our investment in the Fresno area and the entire Central Valley from Bakersfield to Sacramento. We are proud to step up and participate in the renewal efforts in Downtown Fresno. Chukchansi Park will be a great place to bring the community together with a wide range of entertainment."

The Fresno Grizzlies have operated under new ownership since October 13, 2005. Since then, they have dedicated over $1 million to stadium improvements and increased park attendance by 9% over the 2005 season. In just a little over a year’s time, the new ownership team has negotiated the continued affiliation with the San Francisco Giants and the purchase of the Fresno Falcons Hockey Team. They have also brought many diverse stadium events including Fresno Fuego’s inaugural soccer game in the ballpark and three planned stadium concerts. – CelebrityAccess Staff Writers