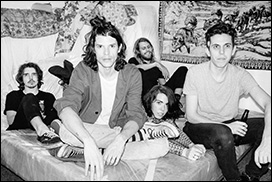 In a post on their social media, a rep for the band wrote:

"We deeply regret to announce that Hannah’s vocal cord issue that caused some tour cancellations in December continues to persist. On her doctor’s recommendation, she is unable to do any sustained touring due to the stress of singing almost nightly. This is absolutely heartbreaking news for us. We were very much looking forward to seeing you all on our spring tour and visiting cities we had never been to.

"Our plan now is for Hannah to recover fully so that we can get back out there as soon as possible and tour without interruption. In the meantime, we will be able to do a few isolated shows that will allow her voice to properly rest between performances.

"We apologize to our fans, promoters and support acts. We promise to do everything we can to make it up to you."

The group announced at the start of December that they were pulling out of their remaining 2016 shows and planned to pick up the tour on Jan 15th.

As of now, Grouplove is still planning to play several dates, including McDowell Music Fest on March 3rd, Santa Barbara Bowl on April 14th, Coachella on April 16th and 23rd and Red Rocks on August 2nd.