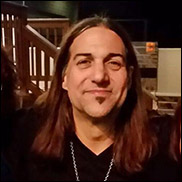 LOUISVILLE, KY (CelebrityAccess) — Kevin Paul McCreery, the lead guitarist for Uncle Kracker, has died after a battle with cancer. He was 53.

In addition to his work with Uncle Kracker's Matthew Shafer, McCreery also wrote and recorded original music with his project AvantGardeDog. He was also involved in the local music community with bands such as the Velvet Saints, the Griswalds, Dev & Kev, as well as numerous others over the years.

He is survived by his daughters; Kinley and Lacey McCreery, one grandson; Greyson Cecil, his "adopted" daughter; Madesyn Betz, his sisters; Vicki McCreery (Blake), Stephanie Irish, and Melissa Girard along with his brother-in-law; Mike Blake.

Memorial contributions may be made in Kevin's memory to Shirley's Way or MERF.