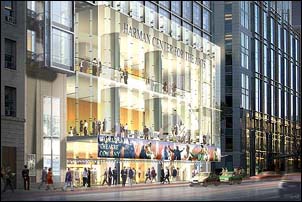 (CelebrityAccess News Service) – Signaling a new era for America's leading classical theatre and the performing arts in Washington, the creation of the new Harman Center for the Arts will be finally become a reality. Two performing arts theatres — the new flexible $77 million, 800- seat Sidney Harman Theatre and The Shakespeare Theatre's existing home, the 451-seat Lansburgh Theatre, located less than one hundred yards away — will be unified by a common artistic mission: to make possible the performance of a larger number and broader range of classical works by The Shakespeare Theatre, while also creating opportunities to feature outstanding local, regional, national and international performing arts companies in a wide variety of disciplines.

Reflecting this change, The Shakespeare Theatre will alter its name in the spring of 2004 to become the Shakespeare Theatre Company. Located in an area of Washington that is at the epicenter of the city's downtown arts and entertainment district, and named in honor of Dr. Sidney Harman and the Harman family, the Sidney Harman Theatre is scheduled to open in early 2007.

The Sidney Harman Theatre interior space will be transformable and adaptable in order to accommodate a variety of presentations in drama, dance, jazz, chamber music, poetry and film. Flexible configurations will allow for a proscenium, thrust, semi-arena or bare stage. Acoustically, the space is designed to accommodate the spoken word and also can easily be adapted for chamber music as well as amplified and recorded music.

Artistic Director Michael Kahn stated, "The Shakespeare Theatre will be able to fulfill its vision of creating a national classical theatre, based in Washington, that includes its sister arts of music, dance, film and the spoken word, drawing audiences from around the corner and around the world. The creation of the Harman Center is an essential component of realizing this expanded mission. It will not be a Center in the traditional physical perception of the term — with multiple spaces linked under one roof like the Barbican Centre in London and the Kennedy Center in Washington, or geographically existing on the same parcel of land or campus like Lincoln Center. We chose the term because it speaks more to the institution we will become — for the very reasons why we want to incorporate other art forms under the rubric of center."

In addition, The District of Columbia has invested $20 million in the form of a grant, enthusiastically supported by Mayor Anthony Williams and unanimously approved by the City Council, led by Jack Evans, chair of the D.C. City Council's Committee on Finance and Revenue.

The Harman Center will also attract wider attention to distinguished local presenters and companies, as well as provide venues for presenting many great ensembles and performers from around the world who currently bypass Washington for want of affordable, mid-sized theatres with state-of-the-art amenities and acoustics.

The new technology within the Sidney Harman Theatre will create distance- learning and education opportunities for teachers and students throughout the country, and according to Nicholas T. Goldsborough, Managing Director, "will help realize one of the institution's highest aspirations of making its work available to every middle and high school in America."

Architect Jack Diamond of Diamond and Schmitt Architects Incorporated of Toronto, Canada, has created a design for the Sidney Harman Theatre that is both sensitive to its urban environment and a totally adaptable theatre venue. Occupying the first five and one-half floors of an 11-story office tower, the glass curtain wall of the facade will feature a projecting glass bay or "urban window" functioning as a three-story marquee, drawing in passersby to the light and movement within the theatre's lobby on its orchestra and balcony levels.

The interior theatre is a carefully crafted and intimately proportioned room, providing a seamless marriage between advanced technology and a variety of elementary stage configurations and devices that render the space totally flexible, with the capacity to be reconfigured with a minimal amount of effort.

The Shakespeare Theatre, under Kahn's leadership since 1986, has dedicated itself to becoming the nation's premier classical theatre. By focusing on works with profound themes, complex characters and heightened language written by Shakespeare, his contemporaries and those playwrights he influenced, The Shakespeare Theatre's artistic mission is unique among regional theatres: to bring to vibrant life groundbreaking, thought-provoking and eminently accessible classic theatre in a uniquely American style.

"With the creation of the Harman Center for the Arts, our hope for its success is three-fold: to create a wonderful synergy of purpose with the addition of other arts forms to classical theatre; to create a unique environment where the open-endedness of the classical theatre can be enjoyed within a space that mirrors that classic sensibility; and to create performing arts spaces that are accessible to all, promoting an egalitarian inclusiveness that is uniquely American," concluded Kahn. –Bob Grossweiner and Jane Cohen