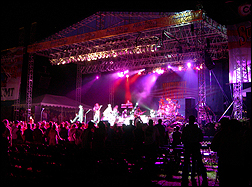 SUWANNEE, FL (CelebrityAccess MediaWire) — Dierks Bentley and Trace Adkins have been announced as the headline acts for the 2007 installment of the Suwannee River Jam. The Jam, to be held at the Spirit of the Suwannee Music Park from April 19-21, is one of the South's longest-running outdoor country music festivals.

Both Adkins and Bentley are two of country music's top stars. "We're excited to have Dierks Bentley, as well as Trace Adkins anchoring next year's Jam," Spirit of the Suwannee Music Park President and CEO James Cornett said "These are two of today's hottest acts, and we think they're a perfect fit for the South's biggest country music festival."

Dierks has been nominated for the 2006 CMA Male Artist of the Year award and has been charting strongly since the release of his latest album, "Long Trip Home". Adkins has also enjoyed recent chart success with his #1 hit "Honky Tonk Badonkadonk."

A complete lineup for the event is forthcoming.

The Jam will feature the popular First Music Stage, presenting top-notch country talent during the breaks from the Jam Stage. There will be a VIP tent and Silver and Gold VIP passes. Silver VIP will include reserved seating, complimentary beverages (beer and soda) while Gold VIP will include the silver package perks in addition to three catered meals. Both packages will allow access to the VIP tent. Other amenities at the park will include a full service restaurant, stable, country store, golf cart rentals and the Canoe Outpost.