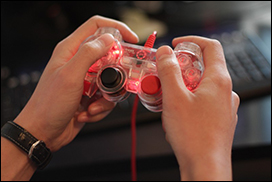 (Hypebot) – Although music has in many ways lost some of its potency as the driving force behind the world's increasingly sprawling subcultures, one particularly large subculture, the gaming community, has developed into a massive underground dance music scene.

With the rise of the internet, music has lost more than industry revenues. Music has lost its cultural monopoly for identity building. Music used to be the only fast way in which people could understand that there are other people around the world, with similar ideas and feelings. People who are just like them. Now, social media & internet communities have stripped music from that. A Google search can instantly connect you to people who think the same things you do. Music is simply not important for that anymore.

A large aspect of music’s identity building nature used to be subcultures. Music was at the core, and perhaps the fuel for these subcultures. Subcultures still exist though, but not in the massive way they used to and have less appeal for the middle class. Many that remain are porous, intertwined with all the shades of ‘hipster’ you can imagine.

But there is one massive subculture that remains: gamers. It’s an identity and producers are providing it with a soundtrack.

Emblematic of the music culture among gamers is the label No Copyright Sounds. It was created to discover and provide royalty-free music for gaming videos. By now, it has grown out to a YouTube channel with millions of followers, and hundreds of thousands of followers on their other channels, adding up to millions. They’re now part of AEI, a full-stack music company which also runs a handful of other well-known music networks.

No Copyright Sounds is emblematic, because it comes from the subculture itself. It represents the gamer, which is the epitome of the digital native. They expect free access to music, which is why you’ll see most of the music targeted at this audience offered as free downloads. They don’t expect free music, because they’re unwilling to pay. They spend lots of money on their computers and games. They want free music because of the convenience. You might pay for Spotify, but if you want to share music with other gamers, it’s still more effective to drop a YouTube link.

Another aspect of the digital native is that they exist in networks. If you want information to spread in networks, you have to remove the barriers. So to serve them, you have to go free-first. This means producers in genres specifically targeted at gamers are either looking for alternative revenue streams, or are happy to do it for the love of it. Most are gamers themselves: they’re producing for people like them and get fulfilment from that. It can be that simple.

Perhaps the largest online-only genre is something called nightcore (nxc for short). Nightcore is a remix culture. Most commonly, producers take a pop or dance song, raise the BPM and pitch, do some additional editing and that’s a wrap. Here’s an example of Kelly Clarkson’s Since U Been Gone getting the nxc treatment. But sometimes the BPM is not raised, sometimes it’s rock or metal, sometimes it’s an original production. It’s basically the opposite of vaporwave.

The spectrum of music for gamers has a lot of gradients and you can go deep into niches. For instance, related to the gamer subculture is the phenomenon of furries, basically people that enjoy role-playing in custom-made anthropomorphic animal suits. There’s also an online equivalent, cyber furries, which is probably best represented by the Lapfox Trax label. All the producers on the label are avatars of the same guy.

Numbers mentioned earlier already showed that this is not an underground movement, and services are taking note. Twitch, a platform for streaming games, created a music section. Spotify has a whole section of playlists aimed at gamers.

The most exciting or inspiring thing about this subculture is that people can be themselves without compromise, make the music they believe in, and find audiences for it. Music that you’ll never hear at a liveshow, like the Undertale soundtrack, but finds resonance with millions of people online. And then there’s the cross-overs.

Due to the sugary nature of nightcore, it found lots of sympathy from artists inspired by the music of SOPHIE or the PC Music label. Both have been important to pop music in recent years, with the former producing for Madonna, and the latter resisting an offer from Skrillex. Their sounds can be described as a kind of artsy, over-the-top, hyperpop music. Nightcore artists are happy to incorporate that, to provide a more accessible version of the style:

Speaking about accessible… You know what’s not accessible? Hardcore. Gamers enjoy the high energy offered by happy hardcore, an offshoot of 90s hardcore rave. So, that too, finds an audience:

The most important thing is: most of the people who listen to this music will never see these artists live. Partly because they just might not be interested in going out to a club, but also because there’s just not really a scene for it, despite these artists having online followings of hundreds of thousands or millions.

Outsiders are taking note, but the music scene’s very much defined as ‘by gamers, for gamers’. While now it’s niche in business terms, and hidden from plain sight if you’re not involved with it, it has three trends going for it.

One is the rise of virtual reality and tools that allow for ‘cyber raves’.

Virtual Reality is Going to Change our Music Experience, Forever

In the first edition of MUSIC x TECH x FUTURE, I took a wide view on why VR is music’s next frontier.medium.com

Second is the rise of Esports, which has exhibited 50–70% year-on-year growth rates and will continue to grow rapidly.

The other is that it’s getting easier to sample, remix and edit tracks and distribute the music, without the fear that it will be taken down. The former CEO of Beatport now runs Metapop, which focuses on exactly this problem. And there’s Dubset, which has partnerships with major streaming services.

With the trends going for it, this music subculture with all its subgenres, is about to blow up.

(and tune into my gaming music playlist…)