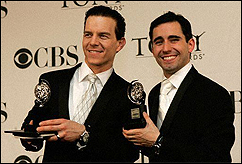 NEW YORK (AP) — The falsetto-voiced boys from Jersey and the high-spirited lads from Britain are now the new princes of Broadway.

"The History Boys," Alan Bennett's clever and affectionate exploration of the relationship between an eccentric teacher and his students, won six Tony Awards, collecting more trophies Sunday night at the Radio City Music Hall ceremony than any other Broadway production this season. "Jersey Boys," a toe-tapping, finger-snapping memoir of Frankie Valli and the Four Seasons, was named best musical and won four awards.

"It almost seems unfair to get prizes for something we have so much fun doing," said Bennett, who won a special Tony in 1963 for the revue "Beyond the Fringe."

"You are insanely talented people," said Julia Roberts before giving the best-actor prize to Griffiths for his portrayal of the unorthodox yet beloved teacher.

In his Broadway debut, John Lloyd Young, who plays Valli in "Jersey Boys," took the top actor-musical award and dedicated the prize to his father. After the show, Young said winning the Tony was "a very personal thing for me. … To have been an usher a year and a half ago and now to be starring in a Broadway show and holding this — this is a triumph for everyone in my life."

While "Jersey Boys" walked away with four Tonys, its main competitor, "The Drowsy Chaperone," won five, including best book and score. The endearing, buoyant musical — a Canadian production — celebrates Broadway's past and was the only musical this season not based on a book, movie or pop tunes.

"It's the longest-running show in Canadian history — 12 performances," said Bob Martin, who co-wrote the book with Don McKellar. Martin stars in the show as a lonely guy called Man in Chair who loves musical theater — especially an old show from the 1920s.

After the ceremony, Martin was asked where his character would store his Tony award and where Martin will put his.

"He would probably strap it to his head and walk around with it because it is something he would never ever dream of winning. Me, I don't know what I'll do with it," quipped Martin, who said he was "blown away."

Martin's Canadian cohorts, Lisa Lambert and Greg Morrison, received the prize for music and lyrics. It also won two musical-design awards — for sets and costumes. And an exuberant Beth Leavel, who portrays the show's inebriated title character, scooped up the featured-actress musical prize.

The race between "Jersey Boys" and "The Drowsy Chaperone" was the evening's most competitive contest, but there were a few surprises. LaChanze won in the actress-musical category for her portrayal of the courageous Celie in "The Color Purple," based on Alice Walker's Pulitzer Prize winning novel. It was the only award the musical received, despite 11 nominations.

"I fell in love with the character through the novel and was wooed even more by the film," said LaChanze. Walker gave her a ring after she heard LaChanze at a reading for the play; LaChanze said she wore it Sunday night for luck.

"The Pajama Game" edged out "Sweeney Todd" for the musical revival prize and took the choreography award, which went to its director Kathleen Marshall. "Sweeney Todd" managed two awards, one for its director, John Doyle, who developed the concept for the show — having the actors play the show's instruments. The revival also grabbed an award for its new, spare orchestrations.

"I never expected a show of mine to be on Broadway," Doyle said. "I'm really naughty — I've talked of taking the Broadway out of Broadway."

Cynthia Nixon won the best actress-play prize for her performance in "Rabbit Hole," portraying a mother whose young son dies in an auto accident. Ian McDiarmid who plays Ralph Fiennes' fey, funny manager in "Faith Healer," yelped out a "fantastic" as he ended his speech thanking voters for his featured-actor prize.

The Lincoln Center Theater production of Clifford Odets' stirring 1935 drama "Awake and Sing!" received the prize for play-revival as well as a costume design prize.

No single host shepherded the presenters and winners through the telecast, although a parade of stars including Roberts, Julie Andrews and Oprah Winfrey, a "Color Purple" producer, were on hand to entice viewers to the CBS telecast.

The Complete List of Winners at the 2006 Tony Awards: