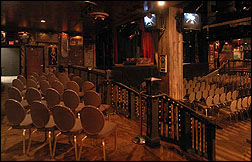 The facility (White Swan Building), is being transformed into a 60,000 square foot dining and entertainment complex that houses a 1,625 capacity music hall, a 400 seat restaurant, special event facilities, a company store and a Foundation Room, which is a membership club that features a private lounge and fine dining area.

Anthony Nicolaidis will be heading up the venue’s talent department, which expects to produce over 200 live music events annually. Nicolaidis was formerly talent buyer for HOB Cleveland and was also involved in bookings for Blossom Music Center and Scene Pavilion (now Plain Dealer Pavilion). House of Blues has also inked a consulting deal with Charles Attal, of Austin’s Charles Attal Presents, to assist in the booking efforts of the club venue.

General Manager John Tate will oversee operations of the Dallas venue. Tate comes to Dallas by way of HOB Chicago, where he was the Director of Venue Operations. Prior to joining the House of Blues team in 2005, he built his resume with 16 years of experience in venue operations and marketing in the restaurant and concert club industry throughout the Midwest.

Although the first HOB club to be established in Texas, HOB Dallas will be the 11th branded club in the House of Blues network of venues. Current locations include: Atlantic City, Anaheim, Chicago, Cleveland, Myrtle Beach, New Orleans, Las Vegas, Los Angeles, Orlando and San Diego. The company has plans to continue the expansion of the House of Blues club network over the next several years.