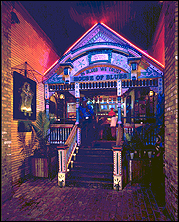 (CelebrityAccess MediaWire) — House of Blues has announced the upcoming partial reopening of its New Orleans venue, located in the city’s famous French Quarter. House of Blues New Orleans, which suffered damage from Hurricane Katrina, is planning to open its doors for business on a limited basis in a demonstration of the company’s commitment to the revitalization of New Orleans.

On Monday, December 12, the Southern-inspired Restaurant and Bar will begin serving lunch and dinner daily. Preceding the restaurant opening will be the resumption of limited operations at the private membership Foundation Room on Thursday, December 8.

Later in the month, House of Blues New Orleans will present shows featuring Cowboy Mouth, Dr. John and Better Than Ezra in the Music Hall, resuming its role of showcasing the best in local and national artists.

The full show details are as follows:

House of Blues has let the city know that it intends to serve as a catalyst for the economic redevelopment of the New Orleans entertainment & tourism industry.

"House of Blues has called the French Quarter and New Orleans home for twelve years and we're excited to be part of the renewal of spirit and soul that makes our city unique,” says Jim Sugarman, General Manager of House of Blues New Orleans. "As we head into a brighter new year, House of Blues hopes to be at the forefront of the New Orleans music scene and to play a central role in the revitalization of our great city."

The partial reopening of the New Orleans venue will serve as a bridge for nationally touring artists to return to the city and provide local musicians with a pipeline of employment and an opportunity to showcase their incredible talent.

“We are proud to showcase several of New Orleans homegrown artists to help us ring in the New Year,” says Sonny Schneidau, Talent Buyer for House of Blues New Orleans.