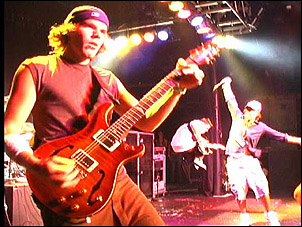 (CelebrityAccess News Service) – Hoobastank were forced to cancel a number of dates due to a motorbike accident in Myrtle Beach, SC involving guitarist Dan Estrin. "We were riding these little mini-motorbikes around the parking lot, and Dan drove into a dark roped-off area by the buses", said vocalist Doug Robb. "The rope caught him in the chest and he fell and hit his head pretty hard on the ground."
What seemed like a simple injury resulted in a small fracture in his skull which
caused a blood clot that was pushing against his brain near his left temple. Fortunately, it was a simple surgical procedure in which the clot was removed. Estrin is currently in serious but stable condition, and he should fully recuperate in a few days.

A string of live dates have been canceled starting with the August 27 show in Charlotte, NC and ending in Memphis, TN's on September 2. The band will resume their tour with Die Trying and Letter Kills on September 4 in Camp Lejeune, NC.