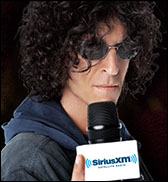 In news first announced by Stern during his show on December 15th, the radio presented said he had renewed his contract with SiriusXM to continue to produce and host The Howard Stern Show for the next 5 years.

SiriusXM and Howard Stern Productions also agreed to a 12-year deal for use of Stern's extensive audio and video library drawn from performances, specials, and shows spanning his more than 30-year broadcasting career. Video plans will be announced at a future date and will include video of The Howard Stern Show as well as the Howard Stern archives and special programming.

The new agreement was crafted over several months, and involved long negotiatons between SiriusXM executives Meyer and Greenstein, and Stern's long-time agent and confidant, Don Buchwald.

"Jim, Scott, and I have been discussing this arrangement for some time. Obviously, the terms and conditions of a deal of this nature required a lot of give and take, as well as creative thinking on everyone's part, and I am grateful to them both for the hard work they invested to make this deal a reality," said Don Buchwald, founder of Don Buchwald & Associates, Inc. "Howard and I are excited to enter into this cutting edge and truly unique broadcasting agreement with SiriusXM that I believe will further the legacy of Howard Stern." – Staff Writers