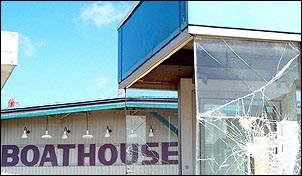 (CelebrityAccess News Service) — The Boathouse in Norfolk, VA, ravaged by Hurricane Isabel last year, has never reopened. The 21-year-old venue was one of the country's first to offer all-age shows. Some of the of the acts to play the cherished non air-conditioned room were Tina Turner, The Ramones, Bruce Hornsby, Run-DMC , Dave Matthews, Stevie Ray Vaughan and Double Trouble, Oingo Boingo, Smashing Pumpkins, Phish, Sheryl Crow, Chris Isaak and George Thorogood and the Destroyers.

The Boathouse is municipally owned and leased to Clear Channel Communications for $370 per month. Hurricane Isabel's damage was severe and caused structural problems. It would cost more than $1 million to repair the roof, which was stripped away, , according to Stanley Stein, Norfolk’s director of facilities management.

“The realities are the realities,” Stein told the Virginian-Pilot. “I doubt if it will ever reopen. My guess is we will probably end up demolishing it.”

The Boathouse opened in 1983 under Cellar Door Concerts and was run by Bill Reid." — Bob Grossweiner and Jane Cohen