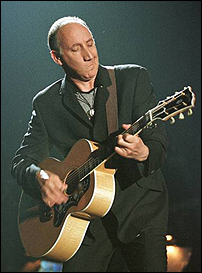 Pete Townshend, who was arrested on January 23 on child-porn charges, says he has evidence that backs his statement about viewing child-porn websites for research purposes for his upcoming autobiography, which will include material on how he may have been abused as a child.

On his www.petetownshend.com website, Townshend posted that he has evidence from the Internet Watch Foundation, a UK organization working to minimize the availability of illegal content on the Internet, particularly child abuse images, that will clear him of the charges.

At the time of his arrest, Townshend stated that he had been in contact with the Internet Watch Foundation, a UK organization working to minimize the availability of illegal content on the Internet, particularly child abuse images, regarding his concerns over child pornography on the Internet. At the time the story first broke, the IWF denied that they had in fact heard from Townshend. Now they admit that they did in fact have communication with him on a number of occasions.

"The IWF was the correct body for Pete to approach but since some of the media have reported the fact that the IWF denied receiving any communication from him we thought it was important that this updated information was published," they said on their website.

In response to this new revelation by the IWF, Townshend says, "You may recall that among the media frenzy of a couple of weeks ago, representatives of the Internet Watch Foundation told the press and the news stations that they had never heard from me. I, of course, know that I did communicate with them several times last year, and they have now supplied to us copies of my e-mails to them, one in August and the rest in November. My lawyers have written to the Founder of the IWF, Mark Stephens, who was adamant that they had never heard from me, asking for an explanation."

The organization said it initially denied any contact with Townshend because they weren't explicitly given permission to release the information.

"Because of the provisions of the Data Protection Act, we are unable to comment or disclose information about the personal details of individuals who make reports to us unless they give their permission," they commented on their website.

Townshend's questioning by the police has been rescheduled for sometime in February.