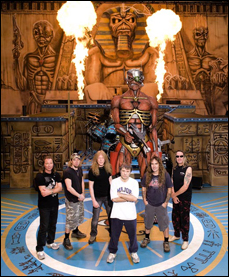 DUBAI (VIP-NEWS) — Following the huge international success of their spectacular ‘Somewhere Back in Time World Tour 08’ Iron Maiden will be taking to the skies once again in 2009 for a fourth and final leg starting at Dubai’s Media City Amphitheatre on February 13th.

Loaded up with a full complement of band, crew and twelve tons of stage set and equipment, the band’s customized Boeing 757, christened Ed Force One by the fans and flown again by Astraeus Airlines Captain and Maiden vocalist Bruce Dickinson, will be circumnavigating 80,000km around the planet for concerts in 19 cities in eleven countries, making it a staggering 37 countries in total visited on this tour, playing to almost two million fans.

The ‘Somewhere Back In Time’ tour revisits the band’s history by focusing almost entirely on the 80’s in both choice of songs played and the stage set, which is based around the legendary Egyptian Production of the 1984-85 ‘Powerslave Tour’ which was featured on the recent DVD “Live after Death”. This is arguably the most elaborate and spectacular show the band have ever presented, and will include some key elements of their Somewhere In Time tour of 1986/7, such as the Cyborg Eddie..

Says band founder Steve Harris “ We had a terrific time in Dubai when we played at Desert Rock Festival a couple of years ago. It seemed there were fans there from all over the Middle East and even farther afield and it felt like a very special occasion. So when we decided to take out Ed Force One again early next year we all thought that Dubai would be a great place to start.

We will be loading onto the plane as much of the production and stage set as we can ram in, along with plenty of pyro!! The set list will be a bit different to the shows we have done so far on this tour as we will include a few more songs from the first four albums. This tour is likely to be the last time we play many of these songs live so we really will be giving it everything we have got!”

Taking off in early February Maiden will make their first appearances in New Zealand for 16 years via Dubai and Bangalore followed by the long haul up to Mexico and then finishing with an extended run through Latin America.

Comments Bruce Dickinson “The unique way of touring earlier this year with everyone and all our gear on the plane helped to make 2008 easily one of the most successful, exciting and fun years in the band’s career. Taking Ed Force One around the planet and playing to our fans in so many different countries was an incredible experience for all of us. I personally found that flying and performing was one of the most challenging and satisfying things I’ve ever done despite the rigors and the many logistical difficulties we encountered.

In fact it was so much fun we decided to do it again as a final leg of this tour and where better to start off than in Dubai. All in all this will be a fantastic way to round off a tremendous year for the band before we take a bit of time off and then start work on a new studio album.”

The Iron Maiden plane Ed Force One has been back in regular airline service since the end of the first leg in March this year and has been used for the ‘Bruce Air’ fan club flying trips during the European leg of the tour, as well as Bruce flying various missions to bring troops back home from tours of duty in Afghanistan and collecting stranded British tourists in the recent major airline closures. However the Boeing 757 will be taken back into the hanger soon to be completely refitted and its Maiden livery restored, this having been removed due to fears of evil ju-ju spirits– Eddie! – inhabiting the plane from worried passengers on its summer route from Central Africa!