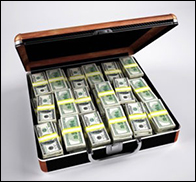 (Hypebot) – Originally an illicit under-the-table business, payola has since evolved into the somewhat more legal and above board practice of corporate artist sponsorship, although it still drastically impacts an artist's ability to make it or break it.

Payola has always been part of the music business and many insiders feel that it’s the reason that some artists become stars, and some stars become superstars. Without money or favors changing hands between the record label and the radio station/streaming service, a song might never gain the visibility it needs to become a hit. While this was a dirty under-the-table business in the past, today it’s a lot cleaner and above board in that we call it “corporate sponsorship” instead of payola.

What is payola? When it first reared its head in the 1950s, a record label would drop a wad of cash on a DJ or program director in order to get its record played on the station. It was basically renting the air time, or sponsoring the song, but it was never identified as such (or probably even thought of in that way). Soon payola was made a crime, so the labels then turned to “independent promoters” who handled the same transactions with the stations so the labels could legally say they weren’t involved. In many cases, drugs, vacations, and luxury items like big screen TVs were substituted for cash, but it had the same effect – getting airplay for the song on the station.

Today that still might happen in radio, but much of the attention has now turned to playlists, where indie promotion men now do their thing trying to influence the influencers to include a song or album on their playlist. That said, a new form of legal payola now exists in corporate sponsorship, which is completely out in the open even though we might not recognize it as what it really is.

It’s much more difficult to get radio airplay these days since stations are now owned by large station groups, so brands, bands, artists, and labels have turned to sponsorship to fill the gap. For instance, Pepsi launched “The Sound Drop” in a partnership with MTV, Shazam, and iHeartMedia to spotlight artists who are already on major labels and in rotation on iHeartRadio. Not to be left behind, Dr. Pepper’s “One of a Kind Sound” is a series of artist promo spots designed to look and sound like pre-release album teasers. And of course, a few years ago Warner Music famously partnered with iHeartRadio to actively promote its artists (there was even a big announcement). Radio stations and groups continue to offer festivals and that’s also become a huge business. In fact, there was over $1.5 billion in sponsorship money spent last year for live events.

The artists of past were very idealistic about anything related to sponsorship and stayed as far away from it as possible in an effort to keep their music as pure as possible. Today those ideals are pretty much dead, as sponsorship is the main focus of the artist, management, labels, and brands. It’s a new world out there where we might call payola by a different name, but it’s still payola just the same. If you don’t have the money, you can’t play the game.