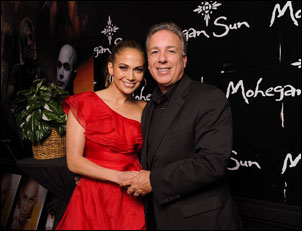 MONTVILLE, CT (CelebrityAccess MediaWire) — Though she's not officially touring (yet) pop diva Jennifer Lopez put in a special, one-of-a-kind show at the Sun Arena as part of the Mohegan Sun's 15th Anniversary gala and Tom Cantone, the Sun's vice president of sports and entertainment filled us in on the backstory.

The show was one for the books, with J-Lo playing to an audience that was strictly standing room only at the 10,000 capacity arena. The show resulted in three weeks of national news coverage for the Sun and according to Cantone, they estimate that more than 100 million people heard about the Sun as a result of the coverage of the performance.

"J Lo was going to stay in L.A. on Tuesday to do a live satellite feed for her Kohl's clothing line roll out. We came up with the idea that they do the Kohl's press event live from Mohegan Sun and then roll right into the Arena for rehearsals. They agreed and as a result, we got national exposure as part of the live chat with every major market morning show in the U.S. when she promoted where she was and why." Cantone told CelebrityAccess.

Reviews for the show were solid and Lopez reportedly had the audience eating from her hand, with the singer nearly moved to tears at one point by the experience.

The 75-minute performance was built from the ground-up exclusively for the Sun by Lopez's manager Benny Madina and her tour manager Fabian Herrera, with support from more 110 crew, 25 dancers, 15 musicians and 3 backup singers. The performance also featured state-of-the-art pyrotechnics, numerous costume changes and elaborate video screens that were custom-made for the show.

Lopez started rehearsals for the performance in L.A. but she flew by private jet to continue rehearsing at Mohegan Sun for the week prior to the concert, running through the performance two to three times a day.

According to Cantone, booking the show was a once-in-a-lifetime experience, and one that earned him a nod for 'Booking of the Year' by a national trade publication.

"[With Lopez] on the cover of every magazine; appearing on American Idol; with a new album and video; with sponsorship deals all over TV; my task was to book her was no easy assignment as she was not touring. But I got lucky and made the call that changed everything." Cantone told CelebrityAccess.

While Lopez has yet to officially announce a tour in support of her latest album "Love?" which dropped earlier this year, the special date at the Sun may offer a preview of what her likely 2012 tour may look like.

"This was so special that it may never happen again, and I was the lucky one to be part of such an historic night." Cantone added. – CelebrityAccess Staff Writers