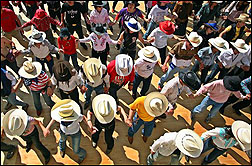 JAPAN (CelebrityAccess MediaWire) — Europe isn't the only place with a burgeoning festival market, in recent years, Asia has been making itself heard with an increasing number of summer music festivals. Japan in particular has made a name for itself in the region and for your edification and education, CelebrityAccess has gathered a short list of the best the island nation has to offer:

The Fuji Rock Festival: Inspired by Glastonbury, The Fuji Rock Festival has been held annually since 1997 and regularly attracts more than 100,000 visitors. This year's event will be held from July 27th-29th and features a strong lineup. Artists scheduled to appear include The Cure, The Chemical Brothers, The Beastie Boys, Yellowcard, Joss Stone and many others spread across numerous stages. For more information, check here.

Summer Sonic: Held since 2007, this festival has two editions, one in Tokyo on August 11th and the other in Osaka on August 12th. The lineup this year features the Black Eyed Peas, Avril Levigne, Gwen Sefani, Sum 41, The Pet Shop Boys and Dinosaur Jr. among numerous others. For more information, check here.

Rock In Japan: Japan's largest primarily domestic festival is spread across 4 stages, (5 if you count the DJ booth) and 3 days (August 3-5) this festival features an eclectic lineup including Grapevine, Polysics, Go!Go!7188, Dustbox and Chara among others – for more information, check here.

Tokyo Summer Festival: This long running series has become a tradition in Japan. First organized in 1985 by the Arion-Edo Foundation, this year's theme is the influence of island cultures from around the world. Events take place across Tokyo throughout the month of July and will cover a wide spectrum of performance traditions. This year will see performances by the Tokyo Chamber Opera, Harpist Ayako Shinozaki, Iceland's Jóhann Jóhannsson, Dan Ettinger, the Tokyo Philharmonics & Shota Nakano performing Mozart's "Great Mass", Rachmaninov Piano Concerto No.3, Zanzibar's Taarab queen Bi Kidude and Cuban guitarist Vicente Feliú to name a few. Check here for more info.

Country Gold: No look at Japan's festival landscape would be complete without mention of Country Gold, Japan's premier country music festival. Organized by Charlie "Good time Charlie" Nagatani, this event is set to drop this year on October 21st at the Aspecta Minami Aso in Kumamoto. Charlie and his band Cannonball will be joined by Mark Chestnutt, Cherryholmes, The Lost Trailers and Bomshell. By now, you know the drill – for more information, click here. – CelebrityAccess Staff Writers