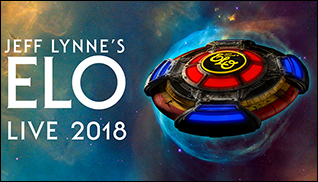 (CelebrityAccess) — Following a tour of the UK and Europe that included a show at London's Wembley Stadium, Jeff Lynne and the Electric Light Orchestra announced plans for their first tour of North America in more than 30 years.

The tour is scheduled to kick off on August 2nd and will hit 10 cities in North America, starting in Oakland, CA at Oracle Arena before wrapping in Philadelphia, PA at Wells Fargo Center.

“Our Audiences are amazing. It’s like they’re in the group. We can’t wait to play for them again.” Lynne said in a presser announcing the tour.

The last time ELO did an extensive tour of the US was in 1981 when the group was riding high with the success of the soundtrack for Xanadu and the band's ninth studio album "Time." ELO has had more than 20 Top 40 Hits across the U.S. and the U.K., making Lynne's sweeping productions some of the most recognizable music of the last forty years and helping sell over 50 million records worldwide.

Widely agreed upon as one of the greatest record producers in music history, Lynne was a co-founder and member of The Travelling Wilburys together with Bob Dylan, Roy Orbison, George Harrison and Tom Petty as well as a producer and collaborator with some of the biggest names in music including The Beatles, Paul McCartney, Ringo Starr, Joe Walsh, and most recently, Bryan Adams.