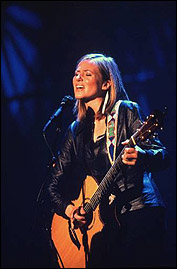 Jewel has announced the artist line-up for the premiere Soul
City Cafe ArtBeat performances, which will be featured during a
special opening segment at selected shows on her upcoming "This Way
Tour" of North America. Jewel and her mother and manager, Lenedra
Carroll, have created Soul City Cafe as a multi-faceted program
designed to encourage and expose developing talent.

M2M, whom Jewel saw perform in New York City earlier this year,
were personally invited by Jewel to be her opening act on the entire
tour, as well as headlining Soul City Cafe ArtBeat. Soul City Cafe
ArtBeat will begin approximately three hours before Jewel's
performance at each of the eight selected venues. The shows will
showcase musical acts and spoken word performers. At the end of July, all the artists will convene in Jewel's
home base of San Diego for a Soul City Cafe ArtBeat festival, with
details to be announced.

The artists featured at the eight special Soul City Cafe
ArtBeat venues include Edify, Dustin Fox, Nafeesa Monroe, Off By
One, Rebeka Reed, Scooter Scudieri, Shade, and Think Of England. Their
work spans genres, from acoustic folk to pop to hard rock to slam
poets.


"I listen to all different kinds of music, and I think my fans do
as well," said Jewel. "My mother and I are committed to supporting new
artists, and we feel it is equally important that we not limit
ourselves to a certain style of music. When I first went out on the
road as a girl alone with her guitar, I often found myself opening for
a hard rock act. It was a terrific experience to play in all sorts of
situations, and it also proved to me that audiences are really
receptive to a wide spectrum of music."

In addition, two emerging videography talents – Johnny Derango and
Roberto Alcantara – have been chosen to work with a seasoned
videographer to shoot footage of the shows. They are both students at
Columbia College in Chicago. Their efforts will provide content for
the Internet so fans can follow the Soul City Cafe ArtBeat
artists' performances and behind-the-scenes action throughout the
tour.

Jewel began her 2002 "This Way" world tour with a series of Asian
dates in late March and early April. She recently returned from a
concert swing across Europe, including two nights at London's
prestigious Royal Albert Hall.