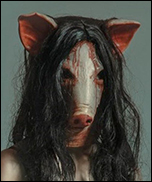 LOS ANGELES (CelebrityAccess) — In what proved to be a moribund weekend for domestic box office results, Lionsgate's “Jigsaw” led the pack with a $16.3 million debut in 2,941 North American theaters.

Directed by Michael and Peter Spierig, written by Josh Stolberg and Peter Goldfinger, "Jigsaw" revives the horror franchise about a diabolical serial killer who subjects his victims to Rube Goldbergian traps. The film is the 8th outing for the venerable franchise and features performances from Matt Passmore, Callum Keith Rennie, Clé Bennett, and Hannah Emily Anderson.

Also following the Halloween theme, Lionsgate “Boo 2! A Madea Halloween,” continued to perform at the box office, generating an additional 10 million over the weekend.

Not finding much traction in its North American debut was the George Clooney-directed "Suburbicon" which earned a slim $2.8 million over the weekend.

“It’s been another really slow weekend for a month of October that has seen a ton of product with both big and small released into theaters with a seemingly indifferent (and distracted) audience that is clearly waiting for the Holiday blockbuster and Oscar season to motivate them toward the multiplexes,” said Paul Dergarabedian, senior media analyst with comScore told Variety. “The World Series and ‘Stranger Things’ certainly were major small screen distractions over one of the lowest grossing weekends of the year thus far.”