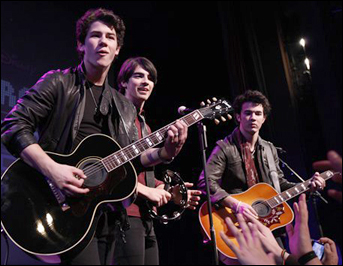 "The Jonas Brothers World Tour 2009" kicks off on June 20th in Dallas, Texas with a 44 city trek across North America. The tour presents the band's most ambitious production yet and will include a massive 140 foot plus stage centered in the arena that aims to give a larger number of Jonas Brothers' fans a closer, more interactive live concert than they've ever experienced before.

This weekend, the Jonas Brothers also revealed a first look at their new stage on their YouTube channel at www.youtube.com/user/JonasBrothersMusic. The show will feature cutting edge technology used in a one of a kind circular water screen, multi color laser effects, motion automated video screens, a giant crane levitating over the audience plus other surprises that will bring the tour to the next level of concert entertainment. Special guests on the North American leg of the tour are American Idol winner and 19 Entertainment/Jive Records, platinum selling artist, Jordin Sparks and rising stars, Honor Society.

"The Jonas Brothers World Tour 2009" will also take the band to three continents where they will perform their hits along with new music from their upcoming Hollywood Records album set for world-wide release on June 15th. Starting on May 17th in Monterrey, Mexico, Jonas Brothers will bring their world tour to Latin America for six dates in countries such as Peru, Chile, Brazil and Argentina. Hollywood Records artist and star of the Disney Channel original movie "Camp Rock," and the forthcoming television series "Sonny With A Chance," Demi Lovato, will be opening all Latin American shows on "The Jonas Brothers World Tour 2009." After a brief visit to Europe in June including sold-out dates in Madrid, Paris and London, the band will tour North American and then return to Europe for a full continental tour in October and November of this year.

Ticket sales for this tour have been phenomenal, said Jason Garner, Chief Executive Officer of Global Music for Live Nation. The band has already sold out arena dates in 13 major cities, including Madrid, London and Paris, and with additional dates going on sale in Mexico and South America and Europe in April, it's clear to us that Jonas Brothers are a true global touring powerhouse. –by CelebrityAccess Staff Writers