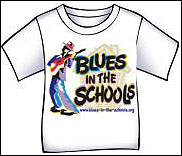 (CelebrityAccess News Service) — Following the overwhelming response of the "Blues In The Schools" seminars, a program developed by the Blues Foundation (www.blues.org) to help perpetuate the heritage and legacy of blues music to new generations of music fans, blues artist Joe Bonamassa will extend his "Blues In The Schools" participation and perform in sixty additional cities nationwide, from January-April of 2004.

In tribute to 2003 "Year of the Blues," Bonamassa released his first full-blooded blues album, Blues Deluxe on August 26. While touring in support of Blues Deluxe, Bonamassa is making "Blues In The Schools" appearances whenever his tour schedule will allow it. His BITS appearances take the teenage students on a 45-minute journey tracing the evolution of blues music from the field workers in the Delta region during the late 1800's up to present day styles. Joe made ten BITS appearances in six cities this fall and the response was astounding.

Tony Dingess, director of Instrumental Music at Meigs High School, said: "I have to tell you that after 26 years as a music educator and having been a part of countless clinics and workshops, Joe's presentation was by far the best thing we have done for our students here at Meigs. He is a rare thing, totally unassuming, yet enormously talented. My students and I were spellbound by his message. Joe Bonamassa is welcome at Meigs High School any time the road brings him this way."

Peter Markes, a music instructor from Edmond North High School, agreed: "The nature of orchestra is such that we work toward constant performance deadlines. With that said, it is rare that I find an opportunity worth changing the class routine. We need everyday that we can get with instruments in the students' hands. However, Joe Bonamassa's presentation was unbelievably worth the time. Not only did it open the students to another world of music aurally, but they actually had a chance to see and hear what makes blues music. If I had another chance to bring in Joe to my classroom, I would do it in a heartbeat."

Born on May 8, 1977 (coincidentally Robert Johnson's 66th birthday), Bonamassa has been playing guitar since the age of 4. At 12, BB King discovered the young prodigy sparking the beginning of his career. Joe would go on to catch the attention of some of the world's most respected performers, touring with King as well as with John Lee Hooker, Joe Cocker, Peter Frampton, George Thorogood, Los Lobos, Jonny Lang, among others.

Anyone interested in having Bonamassa bring his "Blues In The Schools" presentation to your city, please contact Stan Koron at 913-649-0383 or by e-mail at Soundsgood@kc.rr.com. –Bob Grossweiner and Jane Cohen