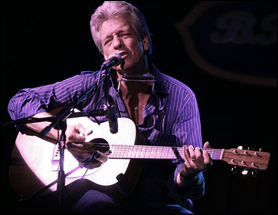 SAN FRANCISCO (CelebrityAccess MediaWire) — On June 26, John Hammond will play a landmark 4000th performance as a Rosebud Agency artist. Signed to Rosebud in 1977, Hammond has since played continuously on five continents and collaborated on stage and on record with some of the most legendary artists of our time. Coincidentally, this 4000th gig takes place in Vancouver, BC, the very same place that Hammond and Rosebud founder Mike Kappus first discussed working together in 1977.

With more than 30 albums to his name, a Grammy win, four additional Grammy nominations, multiple W.C. Handy Awards, a movie soundtrack (Little Big Man starring Dustin Hoffman) and the featured role in a documentary on Robert Johnson to his credit, few musicians have been able to approach John Hammond’s wide range of accomplishments. And Hammond shows no signs of slowing down, with an ongoing schedule of performances worldwide.

Since Hammond’s debut album in 1962, he has recorded with the likes of John Lee Hooker, JJ Cale, The Band, Duane Allman, Dr. John, Michael Bloomfield, Charles Brown, Bill Wyman and Charlie Musselwhite. Over the years he also enjoyed collaborations with legendary Rosebud artists, Muddy Waters, John Lee Hooker and Willie Dixon, as well as with a host of other timeless greats including Jimi Hendrix, Eric Clapton, Bob Dylan, Tom Waits and Howlin’ Wolf.

In fact, Hammond is famously the only person who ever had both Eric Clapton and Jimi Hendrix in his band at the same time, during a five-night stint at the Gaslight Cafe in New York City in 1966. It was also John’s recording session with members of Ronnie Hawkins’ band, the Hawks, which led to Bob Dylan hiring those same players, later to become known as The Band. John invited Bob to his session with the Hawks and as they say, “the rest is history.”

John Hammond has been awarded one Grammy and received four additional Grammy nominations, the latter four all executive produced by The Rosebud Agency's Mike Kappus, including one co-produced by Kappus and JJ Cale. In recent years, John’s influence and the long-standing respect he has gained from musicians of all walks has been borne out by the list of artists who have produced some of his recent albums, including Tom Waits, Duke Robillard, David Hidalgo and G. Love.

As one of the world’s premier acoustic blues artists, John continues to tour worldwide,
every night delivering the deepest and most intense interpretations of everything from early blues songs to his recent original compositions. –by CelebrityAccess Staff Writers