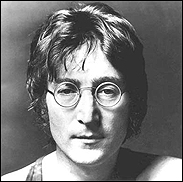 For the first time ever, the whole John Lennon's solo catalogue will be available for exclusive digital access, starting with the new definitive greatest hits album Working Class Hero, which was released on CD in the UK and US in October and which will be available to purchase in download form beginning November 7.

The entire Lennon solo catalogue will then be made available digitally beginning December December 6 on a variety of digital music services. A select number of Lennon tracks will subsequently be made available for mobile download in coming weeks/shortly.

"Very few artists in modern times have made such an important cultural impact as John Lennon," said David Munns, vice chairman, EMI Music. "We are delighted that his fans around the globe will be given such immediate access to his music now that they are available for download and soon, for mobile."

"I am very happy that John's music is now available to a new generation of music fans," said Yoko Ono. "New technology is something he always embraced and this is something he would have loved. I always say that he would have been very excited by all the opportunities offered by the development of new means of communication. At this time I think it's important that we remember John for what he contributed to the world. For people who still love John's music and for those now getting into John's music, this opens up a whole new world in which they can appreciate John's music again." –Bob Grossweiner and Jane Cohen