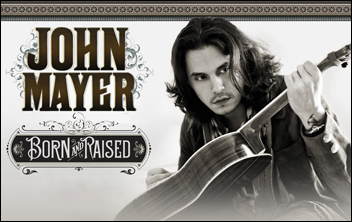 
The artist's tour in support of 2012's "Born and Raised," which topped the Billboard 200, kicks off July 6 at Milwaukee's SummerFest and continues into October.


Mayer will visit over 40 cities in four countries during the trek, including dates at Colorado's famed Red Rocks (July 16) and the Hollywood Bowl (Oct. 5), as well as festival stops at Luna Park in Buenos Aires, Argentina (Sept. 17), and Rock in Rio in Rio De Janeiro, Brazil (Sept. 21).


Opening for Mayer on nearly all the dates will be "American Idol" winner Phillip Phillips. A dollar from each ticket will be donated to the NCIRE to support returning Veterans.


To warm up for the tour, Mayer will perform at the sold-out Tuscaloosa Amphitheater on April 25 and the New Orleans Jazz & Heritage Festival on April 26. They will mark his first full-length concerts since a throat granuloma forced him to cancel initial tour plans around "Born and Raised," his fifth studio album. In January he played a brief set at a benefit concert in Montana.


In this week's Billboard, Mayer tells his harrowing journey in the past year to repair his vocal cords after unsuccessful surgery. He's calling his recovery a dream come true, especially since it means he can sing for his fans again.


"The greatest gift I have in my life is the opportunity to play again, which is also the opportunity to dream again," he says. "My dreams were in escrow, but when I found out this thing in my throat had receded, the most exciting thing for me was having a second chance at a new life. My dreams have come true twice. That's really cool." –According to Billboard.com