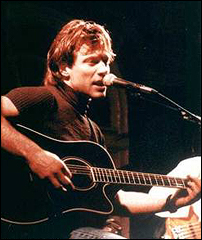 Jon Bon Jovi will take the stage of a different sort on June 15, when he speaks at the world-famous debating society, Oxford Union in England; the speaking engagement has been timed in between concert dates at Huddersfield's McAlpine Stadium and the Milton Keynes Bowl, during the band's "One Wild Night Tour."

"I do have a bit of experience performing in front of crowds but this audience does present a whole new set of challenges," he told the BBC. "I'm not frightened of failure, I'm frightened of standing still."

"Mr. Bon Jovi has always been a favorite amongst the Oxford students," said Amy Harland, president of the Oxford Union. "We can't wait to hear about his experiences performing across the world and his views on the modern world of music."