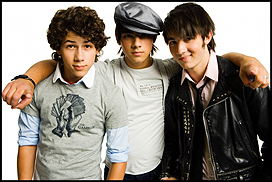 LOS ANGELES (CelebrityAccess MediaWire) — Platinum selling artists The Jonas Brothers sold out dates across the country this weekend for their upcoming Look Me In The Eyes Tour.

The tour is promoted by Live Nation, who recently signed a two-year deal with Jonas boys. They have enjoyed a wave of success this year with a number of songs appearing on various Disney soundtracks and their eponymous named second album debuting at #5 on Billboard. They spent much of 2007 on the road sharing a bill with the hugely successful Miley Cyrus.

Their February 2nd date at the Gibson in L.A. sold out in just 2 minutes, making it the fastest sellout in the venue's 36 year history. Additional LA dates have been added to try to meet fan demand.

Look Me In The Eyes Tour Dates

The following tour dates are on sale Saturday, January 19, 2008: