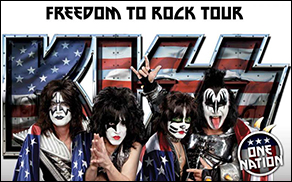 MOSCOW, Russia (VIP-NEWS) — KISS have announced dates for an arena tour of Europe next May which includes four concerts in Germany – opens in Moscow, Russia on May 1 and wraps up in London on May 31.

Earlier this month, the group hosted the 6th annual KISS Kruise, which saw the KISS Army sail from Miami to Cozumel and Grand Cayman for six days ahead of wrapping up their 2016 live schedule with a pair of shows in Mexico.

KISS recently released its concert film, “KISS Rocks Vegas”, which captures the band during their nine-show 2014 Las Vegas residency at The Joint at Hard Rock Hotel And Casino.

In addition to the regular concert, the project also features a seven-song acoustic set featuring vintage 1970s tracks by the group.