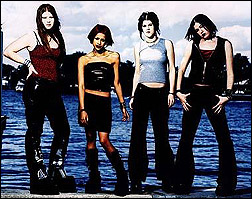 BROOKLYN, N.Y. (CelebrityAccess MediaWire) – The members of Kittie narrowly escaped a life-threatening accident while on location for the shooting of its video, “Into the Darkness.”

A huge acrylic pool that was to be suspended in the air exploded, sending 600 gallons of water gushing on to the soundstage where the band was just completing a live segment. The soundstage was full of lights, electrical equipment, the band’s gear, and a couple dozen people.

Guitarist/vocalist Morgan Lander grabbed her guitar and ran when she heard the sound of ripping cardboard and an explosion. “I knew right away what had happened and all I could think of was to get the hell out of there,” she said. “There were hundreds of thousands of volts in there, with the lights and the cameras, and I was most concerned with electrocution.”

Bassist Jennifer Arroyo was in makeup when the accident happened. “I was just talking to one of the crew saying, ‘Today is gonna be a crazy day…I just know it,’ and a few minutes later Mercedes and Morgan come running in telling me what happened,” Arroyo said. “I was completely amazed when I walked out and looked at the split and shattered tank, not to mention all the water.”

Once it was deemed safe, drummer Mercedes Lander went back to survey the damage. “After the power was shut off, I went back to the studio and found the whole sound stage and my drums in two inches of water,” said Lander. “I’m just really happy no one got hurt.”

Once the danger subsided, the two-hour-long hour clean-up process commenced and the remainder of the shoot went flawlessly.

“Kittie’s an extreme band, we are an extreme crew, and extreme things happen to extreme people,” said Greg Kaplan, who directed the video along with his wife, Rafaela Monfradini. “Believe me, the end result of this video will be a testament to all the hard work and resiliency that went down this past weekend on set. It was incredible how everyone from the band to the crew to the label worked together to salvage our shoot – and, in the end, we did much more than that. I think the traumatic event led to us all putting a whole lot more passion and effort into the video.”

Added guitarist Lisa Marx: “The crew was very professional about it all. They were calm and confident the ‘Grand Rapids incident’ was only a small setback, and were quick to clean up the mess. I was amazed.”

The video for “Into the Darkness”, will have its world premiere on MTV2’s “Headbanger’s Ball” on June 19. This episode will also be hosted by Kittie.

Following the “Headbanger’s Ball” premiere, the video will then be serviced to other major market and regional video shows. The single is set for impact on radio on June 29. “Until the End,” Kittie’s third full-length, will be released July 27 on Artemis Records. –by CelebrityAccess Staff Writers