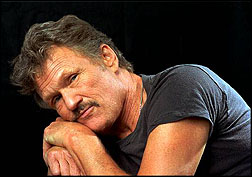 Kristofferson was honored for his lifelong commitment to free expression in music and films. The award, presented by the First Amendment Center, was given to Kristofferson at the Americana Awards Show during the annual Americana Music Association conference. Kristofferson performed his controversial songs, “Don’t Let The Bastards Get You Down,” “To Beat the Devil,” and a new, unrecorded composition called “In The News.”

A lifelong activist for social justice and human rights, Kristofferson was selected by the two groups for blending that activism with his music and professional career and concerns about politics, world affairs and armed conflict. The nonpartisan award, presented last year to country legend Johnny Cash, recognizes Americana musical artists for careers that are marked by civic and social involvement. Kristofferson’s current politically-charged CD, Broken Freedom Song: Live From San Francisco was released in July on Oh Boy Records.

"At the First Amendment center, our goal is to remind all Americans of the importance of protecting freedom of expression," said Ken Paulson, executive director of the center. "The 'Spirit of Americana' free speech award is designed to recognize musicians and songwriters who have used their powers of creativity and freedom of speech to truly make a difference. Kris Kristofferson is an extraordinary artist who has never hesitated to take a stand. We honor him as both a songwriter and citizen."

Kristofferson, born in Texas and raised in a military family, was a Golden Gloves boxer who studied creative writing at Pomona College in California. The Phi Beta Kappa graduate earned a Rhodes scholarship to study literature at Oxford, where he boxed, played rugby and continued to write songs. After graduating from Oxford, he served in the army as an Airborne Ranger helicopter pilot and achieved the rank of Captain.

In 1965, Kristofferson turned down an assignment to teach at West Point and, inspired by songwriters like Willie Nelson and Johnny Cash, moved to Nashville to pursue his music Kristofferson achieved remarkable success as a country songwriter at the start of the 1970s. His songs "Me and Bobby McGee," "Help Me Make It Through the Night," "Sunday Morning Coming Down," and "For the Good Times," were all chart-topping hits. He has starred in more than 44 films and recorded more than 25 albums.