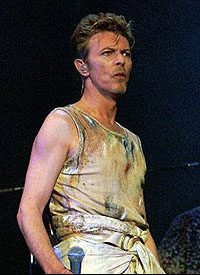 David Bowie has signed with Columbia Records in a multi-record deal through the artist's ISO Records and will release "Heathen," his first studio album in three years, on June 11. The album marks the artist's first studio collaboration in more than two decades with producer Tony Visconti, who has worked with Bowie on numerous albums throughout his career, including "Young Americans,"

According to Columbia Records Chairman Don Ienner, "David Bowie is simply one of the most distinctive, influential and exciting artists of our time, and 'Heathen' is a remarkable addition to his incredible body of work. The album is filled with amazing songs and performances that evoke vintage Bowie without ever looking backward, and I think it's the album that his worldwide audience has been waiting for. Music needs David Bowie right now, and we couldn't be more proud that he has chosen Columbia as his new home."

Regarding his signing to Columbia, Bowie said, "I can't think of a better home for the music that will be made for ISO than Columbia. After my first couple of meetings with the people at Columbia, it was apparent that their enthusiasm for what Tony and I are doing right now borders on boundless."

Following the release of "Heathen," Bowie is expected to perform on a series of European and American festival dates this summer. He will also act as curator of the prestigious Meltdown Festival in London during June.

Multiple Grammy winning recording artist/producer T Bone Burnett and Oscar-winning filmmakers Joel and Ethan Coen have formed DMZ Records, a new label which has entered into a joint venture with Columbia Records Group. DMZ's inaugural release is a new studio album from the legendary bluegrass musician Ralph Stanley, who won this year's Best Male Country Vocal Performance Grammy for his performance of "O Death" on the O Brother, Where Art Thou? soundtrack. Ralph Stanley is slated for release on June 11.

Mark Lazare, president of The DKD Group, is bringing Niko Quintal back to Montreal in April to join Aquarius Records, Tacca and The DKD Group to serve in the dual role of heading "Artist Development /Touring" and also serve as "Executive Assistant" to company chairman, Donald Tarlton, CM.

Quintal, a former drummer who has played on many DKD Group albums has worked for and built a solid reputation during the past several years as an agent and coordinator at The Agency Group in Toronto.

"We are very pleased to welcome Niko," said Lazare. "He is no stranger to our artists who are looking forward to his tenure with the company."

Tarlton added: " The company is embarking on a controlled but aggressive expansion and while we focus on many of the opportunities created by anticipated new government financial programs we believe the addition of Niko will be very important in maintaining a close bond and servicing the needs of our growing roster of artists."

Quintal said, " I am quite excited by this new opportunity and challenge, however, I would be remise if I didn't thank Ralph James, Jack Ross, Lorraine Webb, Colin Lewis, Omar Al-Joulini and Jessica Rosebush for their love and support and also express my gratitude to Neil Warnock, Steve Martin and everybody at The Agency Group, as it has been a thrill and an honor to work with such high caliber artists, mentors and friends."