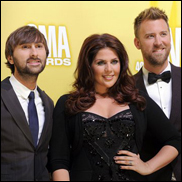 The Nashville, Tenn.-based country music trio had been planning to hit the road starting on Nov. 8th, in Omaha, Nebraska, but has announced that the tour will now kick off with a show on Jan. 10 in Peoria, Ill.

In a post on the group's website, the band says that the reschedule was made in order to accommodate the release of the deluxe version of their most recent album "Golden."

"To accommodate the new release and in order to give you guys the best show possible, we've had to move things around on our tour schedule. The 1st leg of the Take Me Downtown Tour with Kip and Kacey will now kick off on Jan. 10th in Peoria, IL. We hope these changes aren't too much trouble for you, and that we'll get to see you in one of the more than 60 cities the tour will hit next year," a spokesman for the band wrote.

Golden, which was initially released on May 7th, will be re-released on November 12 in 'deluxe' format, replete with "Compass" a previously unreleased track.

This tour will mark the return to performing for the band, which has been on a break due to frontwoman Hillary Scott's pregnancy. – Staff Writers