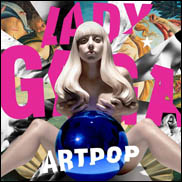 NEW YORK (Hypebot) – Lady Gaga's ARTPOP debuted at #1 on Billboard this week. But topping the chart took just 258,000 in sales, which represents a 75% drop from the 1 million copies Gaga's "Born This Way" sold in it's first week. It also makes Gaga only the third-biggest biggest debut week for a woman in 2013, trailing both Katy Perry and Miley Cyrus.

Label Interscope has spent an estimated $25 – $30 million to promote ARTPOP; and this large a fail could spell trouble for the label, leading to the layoffs of as many as 50 staffers.

What Went Wrong and What It Says About The Record Business

It would be easy to blame the music; though the core of her "Little Monsters" fan base loves the record. Then there was the abrupt departure of her respected manager Troy Carter. But the problem, others say, is meddling by her label

"She originally was going to have the album ready by last Christmas. They made her re-record it. When her tour wasn't selling, they invented a hip injury and told Gaga to go away for months so the public could be interested in her 'comeback.' After the lead single 'Applause' didn't get such a great reception, they made her re-record the album again," one music industry insider told The Examiner who also alleged payola.

"I can't say for sure what she is doing for Billboard, but they are definitely trying to save her. They let her song 'Dope' chart at number 8 this week based on YouTube views that weren't intended just for her," said the same source. "The magazine also counted thousands of free giveaways of the song for that chart position. They are covering up for her big time."

Some of Gaga's sales slump can be attributed to an overall decline in music sales.. First week sales in the 250,000 range are becoming closer to the new normal. But until recently, Lady Gaga's trajectory was nothing close to normal.

If true, the allegations of label pressure on Gaga and the media hark en back to the old school record business that many hoped was gone forever. Hadn't pressure and payments to guarantee a hit been replaced by a more democratic marketplace where the best – or at least the most interesting – rose to the top?

The old school music business is still hanging on. But it's a sign of real progress that their tactics aren't working nearly as well as they used to.