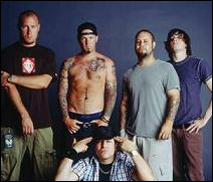 LOS ANGELES (VIP-BOOK) — Limp Bizkit have announced that they are reforming with the original band line-up for the first time in eight years.

Fred Durst, Wes Borland, Sam Rivers, John Otto and DJ Lethal have joined forces once again to tour and record a new album. Guitarist Borland, who left the band in 2001 and returned briefly only to leave again in 2006, has apparently resolved differences with his bandmates.

"We decided we were more disgusted and bored with the state of heavy popular music than we were with each other," Durst and Borland said in a joint statement.


"Regardless of where our separate paths have taken us, we recognize there is a powerful and unique energy with this particular group of people we have not found anywhere else. This is why Limp Bizkit is back."

Limp Bizkit will kick off a world tour in the spring, hitting the European festival circuit. They will also play their first-ever shows in Russia. Tour dates will soon be announced on the band's new website Limpbizkit.com.

They also intend to begin recording a new album. According to NME.com