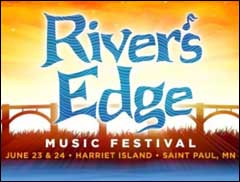 SAINT PAUL MN (CelebrityAccess MediaWire) — Live Nation has begun to spill details about the inaugural edition of the River's Edge Music Festival, a two-day event to be held on June 23 and 24 on Harriet Island.

The lineup isn't restricted to national touring artists and Live Nation has tapped some local favorites to perform, including Polica, Motion City Soundtrack, Quietdrive and The Rope.

The promoter is also taking a high tech approach to the festival, utilizing RFID enabled wristbands instead of tickets for the festival. They are also staging a 'silent DJ stage' which will play music non-stop that will be available for consumption by the public through wireless enabled headphones.

"We are thrilled to bring the Twin Cities the festival it has long deserved, a reflection of the discriminating tastes of its music fans as well as the area's reputation as a cultural leader," said Mark Campana, Co-President, Live Nation. "We will be making the most of this beautiful site and its natural advantages to create an experience that truly reflects the community, creativity, and culture of the area. River's Edge Music Festival will enrich Saint Paul's already vibrant musical landscape and provide a new touring destination for artists for years to come." – CelebrityAccess Staff Writers