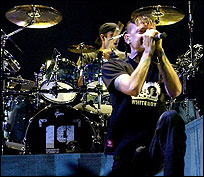 No Doubt, Linkin Park with Jay-Z, Jurassic 5, Story of the Year, The Crystal Method and Camp Freddy performed at the Arrowhead Pond in Anaheim, CA, February 18 for a united cause, Music For Relief: Rebuilding South Asia. The benefit concert raised over $1 million for the ongoing rebuilding effort in South Asia and surrounding countries.

"It's hard to fully express just how grateful we are for the massive effort that made Music For Relief's Concert at The Pond such a tremendous success," said Brad Delson of Linkin Park. "So many amazing people came together to pull off what turned out to be an incredibly powerful night. We are pleased to announce that due to the generosity of the artists, fans, and other remarkable individuals who donated energy, resources and time, over one million dollars was raised. This money will allow UNICEF and Habitat for Humanity to continue essential projects aimed at rebuilding homes, schools, and lives in South Asia."

In addition to the live musical performances, the evening was in high gear with numerous guest celebrities, including Alyssa Milano, Jared Leto, Gavin Rossdale, Rob Zombie and more appearing on stage. The evening also featured special educational video presentations about the disaster and relief efforts including a video montage of Chester Bennington's (Linkin Park) recent visit to Phuket, Thailand and the outlying disaster area.

Linkin Park, along with other concerned musicians, formed Music For Relief to help provide emergency relief for quake and tsunami victims in South Asia. To ensure that funds donated through Music For Relief continue to help with the rebuilding of South Asia, Music For Relief has become partners with UNICEF and Habitat for Humanity International. These two charities will equally split the proceeds raised by the event. Both foundations are continuing relief efforts in the areas hardest hit by the tsunami. UNICEF, which has had a longstanding presence in South Asia, will assist in the recovery and rebuilding process by focusing on providing food and water, medical supplies, and education facilities to children. Habitat for Humanity is helping families by constructing both short-term and long-term shelter for many of the five million people currently displaced from their homes. The Music For Relief organization has already contributed over $1 million to the American Red Cross for it efforts since its inception.

"Forever In Our Hearts" is a song written about, and for, tsunami victims, and is the latest effort by concerned musicians to add support for Music For Relief. The track is available as a download from iTunes starting today. "Forever In Our Hearts," written by Jason Miller of Godhead, features additional performances by Brian McKnight, Mya, Nate Dogg, Fefe Dobson, Ben Moody, members of P.O.D., Papa Roach, Chevelle, Lit and 311, and more. All proceeds from the sale of the track online will be donated to Music For Relief for South Asia quake and tsunami victims. Itcan also be downloaded off the official site for this project at: www.tsunamireliefsong.org. –Bob Grossweiner and Jane Cohen