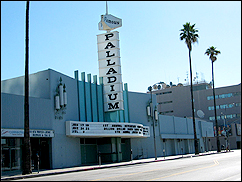 LOS ANGELES (CelebrityAccess MediaWire) — Live Nation, under a new long-term lease agreement to operate, manage and book the Hollywood Palladium in Los Angeles, will completely renovate the storied 4.000 capacity venue, which is scheduled for a fall 2008 reopening. Renovations include a major upgrade to the stage infrastructure to accommodate larger productions and an overhaul of all interior and exterior areas.

The Hollywood Palladium opened on September 23, 1940 with a concert by the Tommy Dorsey Orchestra featuring the soon to be famous Frank Sinatra. It became a television studio in 1961 and over the years has staged numerous awards shows, including the Emmy Awards, The Grammy Awards, The NAACP Awards and Country Music Awards. The venue eventually returned to its music roots, hosting many of rock’s biggest names, including The Police,The Rolling Stones, Led Zeppelin, The Who, Rod Stewart, and Red Hot Chili Peppers.

In Los Angeles, Live Nation currently owns and/or operates the House of Blues on Sunset, The Wiltern Theatre, Gibson Amphitheatre, the Verizon Wireless Amphitheatre in Irvine, and the Hyundai Pavilion in San Bernardino. In addition to its House of Blues in Anaheim, Live Nation also has an exclusive booking agreement with the Avalon in Hollywood, the Long Beach Arena, and the Honda Center in Orange County.

Wolfmother was the last act to perform at the Palladium on December 12, 2006. — Jane Cohen and Bob Grossweiner