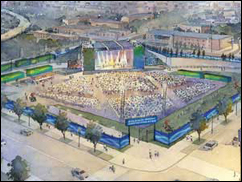 RALEIGH, NC (CelebrityAccess MediaWire) — Live Nation has been tapped to book the brand new Raleigh Amphitheatre, which is set to open in June.

The Raleigh City Council voted to approve the deal with LNE, which will see the promoter bring in between 15-20 musical and comedy acts a year at the new shed, the Triangle Business Journal said. Live Nation will have a little help however and the city plans to also book events at the amphitheatre.

The 5,000 seat venue is still under construction and the city of Raleigh is projecting that the shed will contribute 500,000 a year to the city's bottom line.

The first show is already on the books and the Backstreet Boys are set to perform there on June 6th, followed by the Honda Civic Tour feat. Paramore with Tegan & Sara, New Found Glory, and Kadawatha and then Slightly Stoopid in July. – CelebrityAccess Staff Writers