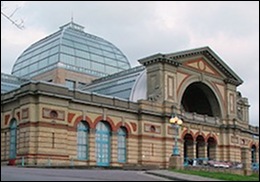 The roof of the Victorian theatre, which has been closed to the public for years, will be fixed up, as will the south terrace, reports the Hornsey Journal. Alexandra Palace has been on English Heritage's Buildings At Risk Register for 15 years.

ATP campaigned for money to help with the restoration of the Victorian theatre last year.

This year's I'll Be Your Mirror event takes place May 25-27, and will be co-curated by Mogwai and see sets from Slayer, Dirty Three, Mudhoney, Yuck and Melvins.

The Black Keys recently played three nights at the iconic venue in Wood Green, North London, and the London landmark has seen shows from Arctic Monkeys, Nick Cave and the Bad Seeds and the White Stripes over the years.

Bombay Bicycle Club will play Alexandra Palace on April 28. Of the show guitarist Jamie MacColl told NME: "The gig at Ally Pally is hugely significant for us. I grew up a stone's throw away from there and I can see it now as I look out my bedroom window. The band first started playing together at my house and we'd often convene there before going to gigs at Ally Pally. In addition to its sentimental importance it's the fact it's also the biggest headline gig of our lives. It's a potent combination and we'll be trying to put on an amazing show."