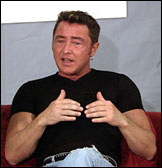 Michael Flatley's Lord of the Dance, that has broken box office records in more
than 30 countries,
is returning to North America for the second leg of its national tour. Starting
September 3 in
Hartford, CT, the tour will visit 32 cities and end on December 15 in
Champaign, IL. In less than
five years, the show has brought 50 million people worldwide to their feet at
sold out theaters,
arenas and stadiums. Flatley, who originated the role of the Lord, serves as the
artistic
director and continues to oversee all aspects of the production. He is the first
American to win the
All-World Championship in Irish Dance, and opened the show in Dublin in
1996.

"Our goal is to take the audience on a wondrous adventure that will ignite its
minds and souls," said Flatley. "We've combined traditional and modern forms of
dance to create a high octane blend of soulful beats and
feet that move too fast to comprehend."

Flatley is listed by The Guinness Book of World Records for having "the world's
fastest feet" at 35 taps per second.

The Lord of the Dance troupe comprises Irish dance champions from around
the world.

"Our first leg of the tour was a huge success," said Lee Marshall, president of
Magic Arts & Entertainment, the tour's promoter and a veteran of many
entertainment events. "This show combines so many
different elements — drama, music and unforgettable dance numbers which
makes it such a crowd
pleaser."

Magic Arts & Entertainment, one of the leading tour producing companies in the
U.S., is also currently producing "Grease" starring Frankie Avalon and "The Magic
of David Copperfield." As former owner and president of Magicworks
Entertainment, Marshall
produced and promoted some of the world's most successful concerts,
theatricals and family
shows.

Lord Of The Dance–2002 domestic Itinerary

November 20 Evansville, IN The Centre