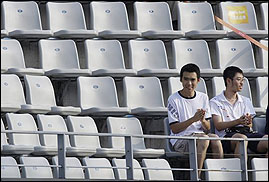 BEIJING (CelebrityAccess MediaWire) — After being touted as the first completely sold-out Olympic games, the stands at many of the events at the 2008 Beijing games have had broad swaths of empty seats, leaving many of those who paid extra for tickets, or didn't get in at all wondering what happened.

The demand for Olympic tickets made big news. When they first went on sale in June, the electronic ticketing system was crashed under the strain and and Chinese ticket-buyers waited in sweltering heat for days with stampedes and near-riots reported at some locations.

Other purchasers were forced to rely on dubious-seeming Internet ticket vendors or scalpers to get tickets at premium prices.

"This is our fourth Olympics, but getting tickets to this one really has been a nightmare," 44-year-old Australian Stacey Watson told the L.A. Times, "Then you get inside and you wonder who got all the tickets, because there is nobody there."

So with this much apparent demand, why so many empty seats? Chinese officials initially attributed the lack of butts in seats as an artifact of the weather, which was humid and rainy at the outset of the games, however while the weather has improved since then, seats are still visibly empty. Another factor lies with the long-standing practice of Olympic organizers to allocate blocks of seating to VIPs and members of the press who may not use them.

Speculation however, may play a larger role in the presence of empty seats. According to the Los Angeles Times, Olympic organizers set aside large blocks of seats to be made available domestically to Chinese often with face values as low as $4. This led to large numbers of tickets being purchased by people encouraged to "snap up what they could." How many of these tickets appeared for resale by the aforementioned scalpers and Internet sites.

Few of the unused seats were sold internationally Mark Lewis, president of Jet Set Sports told the Times. According to Lewis, international travelers had their money returned and the tickets were resold.

Chinese organizers for the games are aware of the problem and after many complaints, they have been taking steps to fill the stadiums. The LA Times reported that they have been busing in "rent-a-crowds" to make stadiums look full.

"It's better. Nobody likes an empty stadium," Dave Andrews, 27, of Perth, Australia told the Times "But you can tell they've just been brought in here to fill the seats. They know nothing about hockey. They cheer at all the wrong times." – CelebrityAccess Staff Writers