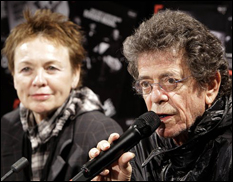 Anderson will perform, “Music for Dogs,” a 20-minute piece she wrote, at a high frequency so that only dogs will be able to enjoy the concert, while the people in the audience will have to sit back and watch, according to The Baltimore Sun. There should be no complaints though, as the concert is free.

Anderson was inspired to put the performance together while backstage before an event. She thought to herself, "Wouldn't it be great, if you were playing a concert and you look out and you see all dogs?" according to The Baltimore Sun. And so she made it happen. –by CelebrityAccess Staff Writers