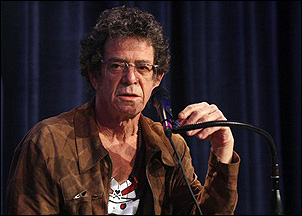 AUSTIN, TX (CelebrityAccess MediaWire) — Lou Reed delivered the keynote at this year's SXSW conference and while the iconic performer had the bully pulpit, he took mp3 technology to task, Billboard reported.

"People have got to demand a higher standard." said Reed during his address in regards to the poor sound quality of the mp3 compression format "Here's our song reduced to a pin drop — what, what, what?! It's like if no one knows any better or doesn't care, it's gonna stay on a really, really low level and people who like good sound are gonna be thought of as some kind of strange zoo animal."

While he was critical of the current state of digital audio, he wasn't entirely without hope for the future. "you hear they've got a newer version (of MP3) that sounds better, and you suddenly hear the other instruments that are on the song. They've got to bring up the standard. You have the world open to you now; you can get almost any song in the world as an MP3, and I suppose if you like it you can go out and try to find a version you can actually listen to — if you like good sound. If you don't like good sound, none of this matters for a second." he said.

Reed also mentioned his tour plans, stating that he had no intention of bringing his recently announced Berlin tour stateside this year. He also stated that the album-based "Berlin" tour wasn't a trial balloon for similar projects, but he didn't rule the idea out, suggesting that both 1992's "Magic and Loss" and 1978's "Street Hassle" would be viable for such an undertaking. – CelebrityAccess Staff Writers