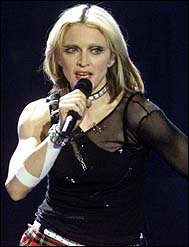 (CelbrityAccess MediaWire) — Madonna will be perform two concerts in August or September at Israel's Tel Aviv Bloomfield Stadium, marking her second appearance in Israel. Her first was in October 1993. Madonna is an active follower of Kabbalah, a sect of Judaism.

Israel is asking the U.S. to remove its travel warning for tourists planning trips to the country, Israel's tourism ministry said in the Israeli press. A U.S. travel warning to Israel would have a direct and damaging impact on Israel's economy.

"We are quite pleased that Madonna, one of the world's leading entertainers will visit Israel this year," Ronn Torossian, spokesman for Israel's Ministry of Tourism told the Israel News Agency. "We hope and expect that millions of others will follow her lead to visit the religious, spiritual and cultural capital of the world."

Madonna prefers the grass at the Tel Aviv soccer stadium to that at Hayarkon Park and has decided to hold her Israeli concerts at the stadium–16,000 tickets will be available for each performance.

Shuki Weiss, who will produce Madonna's performances in Israel, said that the exact dates have not yet been determined. "The artist has promised to perform in Israel and this is certainly going to be a bigger show than she has ever done," Weiss said. "The performance will be set for August or September."

"Madonna will be most welcomed in Israel," said an Israeli official. "Her presence here is a clear statement to every citizen in the free and democratic world not to give into terrorism, to maintain your normal routine and to keep our economies functioning." –Bob Grossweiner and Jane Cohen