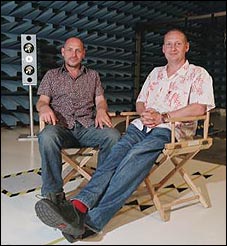 (CelebrityAccess MediaWire) — After 15 years working together as Orbital–Paul and Phil Hartnoll–is calling it quits. Their forthcoming LP the “Blue Album” will be their last. Following the album’s release on June 21, Orbital will play Brixton Academy on June 25 followed by their last ever English live show, closing the second stage on June 27 at Glastonbury.

“I think we feel that Orbital has run it’s course,” says Paul Hartnoll on the band's website. “We’re both pursuing different avenues with our music. And we’ve been sat, as brothers, in the same room for 15 years now–and studios are always confined spaces–I think it’s time for a change.”

Since their first single, ‘Chime’ entered the top 20 in April 1990 Orbital have released six albums and developed a live show that evolved, by common consent, into one of the landmark performance shows of the last decade. They have helped to shape and develop both the character and credibility of electronic music far beyond the disposable anonymity of the first white labels and the acid house scene that they came from. In 1989 when Chime was recorded onto their dad’s cassette player no one expected things to come this far, least of all the band themselves.

The brothers extra–mural interests have all informed the character of The Blue Album, the bands seventh, which evolved gradually over the course of 2003 with the band free from record company expectations and schedules for the first time since their career began. “If anything,” says Paul “It’s closer in character to our first album than our later ones, if only because we made it in our own time and for ourselves.”

With the album complete the band is turning its attention to their final show at Glastonbury. An appropriate venue for a farewell as it was here, exactly ten years before that Orbital delivered a live show that Q magazine listed as one of the fifty greatest live show of all time. “It’s nice to know that we’re finishing, it’s not many bands that do that. They tend to just fade away. And it’s nice to have our last gig at Glastonbury. It’s gonna be a party set, a best of Orbital. We’re not gonna sit there and try and promote the new album. I think if we’re gonna do a last gig we should do distilled set of all the best stuff we’ve done. And that’s what we’re gonna do, play all the stuff that’s stuck around for all this time because they are the favourite ones. This will definitely be our last ever live shows,” confirms Paul, “Although I’m sure Status Quo keep telling themselves the same thing.” –Bob Grossweiner and Jane Cohen