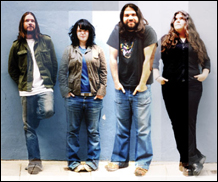 The show was 2nd of Coke's Music Discovery Sessions, the first of which showcased Siouxsie Sioux, who did a gig at the Eiffel Tower in Paris on Sept. 29th. Each headliner will choose support acts from among bands submitting music to the coke.com/music website where it will be evaluated by a panel of judges comrpised of "music experts" and DJs from across the industry.

The next Coke Music Discovery Session gig has been slated for November in Athens, Greece. – CelebrityAccess Staff Writers