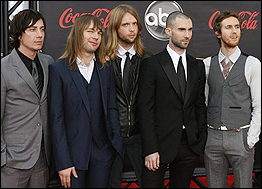 LOS ANGELES, CA, (CelebrityAccess MediaWire) — Grammy winning, A&M/ Octone recording artists Maroon 5 have announced plans for an exclusive nationwide college tour that will kick off this November. The multi-city tour will launch at Murray State University in Kentucky on November 2nd and make eleven stops before wrapping in Kansas at the end of the month. Hip Hop MC, griot, and singer/ songwriter K’naan will serve as the tour’s opening act on all dates. Both artists will be joined by Guster in Lewisburg, PA who will be making a special guest appearance.

Maroon 5’s college tour precludes the release of the group’s new album, which is set for release in the spring of 2010. Earlier this summer the band announced that they have entered the studio with legendary producer Robert John "Mutt" Lange to record the follow-up to It Won’t be Soon Before Long, their multi-platinum selling sophomore album. The quintessential pop-rock producer has produced blockbuster albums for acts like AC/DC, Def Leppard, Bryan Adams, The Cars, Shania Twain and Foreigner.


“After spending the summer in the studio recording overseas, we are excited to be returning home and to the road this fall,” said the band’s frontman Adam Levine. “It’s exciting for us to hit the stage again together and also get a chance to debut some of our new material that we’ve been recording for our fans.”

Maroon 5 has also announced plans for a major contest giving one lucky fan $15,000 using Twitter and TwitVid. Concert-goers will be required to take a video of themselves at the show and submit it to twitvid.com/maroon5. Fans can learn more at twitvid.com/maroon5 or maroon5.com. In addition, the band will be running several contests to win tickets to the show. James Valentine will be challenging students to tennis matches at each tour stop in exchange for tickets. Fans will have to follow Maroon 5’s twitter at twitter.com/maroon5 to find out where and when James will be hitting the school’s courts.

Adam Levine will also be giving fans unique and creative opportunities to win tickets through his twitter account at twitter.com/adamlevine . Follow Adam for a chance to win at each stop on the tour.