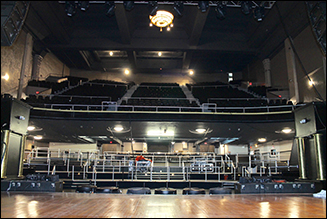 WORCESTER, Mass (CelebrityAccess) — After a long sabbatical in Europe, MassConcert's John Peters has returned to the New England concert scene and will oversee a newly-revamped Worcester Palladium.

The venue, which played a major role in the punk and metal scene in New England, was originally a movie house built in 1928 but was recast as a performing arts center in 1980. In 1990, it was purchased by John Fischer and John Sousa, who ultimately sold the venue to MassConcerts in 2013.

Now, 4 years later, the building has been fully refurbed with all new interior fittings from the bars and bathrooms to the lobby, railings and balcony seating. As well, the venue has seen upgrades to its lobby, bathrooms and has a newly installed HVAC system to boot.

Other improvements addressed artist hospitality, with a newly refurbished back stage/dressing room area as well as a refinished stage, and new rigging and curtains, new top of the line PA (from Scorpio of Mass) and lighting rig courtesy of JDI of Rhode Island.

Peters is no stranger to the New England concert market, and promoted his first show at the Palladium in 1998, with Limp Bizkit, Sevendust, and Clutch on the bill. Other artists who've played the room over the years include Jay Z, Foo Fighters, Kanye West, Bob Dylan, J. Cole, Linking Park, Black Eyed Peas, Slayer, Prince, Korn, String Cheese Incident, Eminem, and Slipknot among others.

Venue capacity is 2560 with an open floor and seated balcony.

Peters also owns the Town Ballroom in Buffalo and The Webster Theater in Hartford, CT.